Used to work in a musicshop in the nineties and when their were no customers I found myself playing this bass which I considered being the best bass in the shop (there was Wal, Alembic, etc)
Spend the most money ever on this bass (4500 euros) and did some gigs on it but when Mr Bassman (known here in Germany) showed interest when he visited me I foolishly sold it...I have owned a lot of basses but this was the only one I regretted selling. Last year he sold it and he was so kind to sell it back for the price I had asked.
I made some choices recently and I sold a lot of basses since I don't feel comfortable anymore in the musical landscape of today. If I find myself playing for fun at home I don't pick up the fivestring anymore and stick to four strings...Thought a long time about it but decided to sell it again and hopefully without regret this time.
I take the liberty to use the description Rainer has written about this bass (I hope he doesn't mind)
I'm asking 3000 euros (shipment included in Europe, but not Switzerland) and the bass comes with the Smith strap and the case. Bass can be send or picked up at my place (just above Brussels), I have recently sold my Wal around here and there are some people who can proof that I have nothing to hide (it is also a small community in Europe so I have a reputation to vouch for)
Since this is a lot of money and these are hard times I also would trade for something of the same value but fourstring and no fretless (A Wal or a Fodera, who knows...try me, you never know)
Some pictures and a quick vid (the action is a bit low but that's personal) but don't hesitate to contact me for more information...Vielen dank, Geert
Ken Smith BMT 5 Flamed Maple

An exceptional Smith in every aspect. BMT models have been built by Ken from 1993 until 1997 - This is one of the very first BMTs ever built. I owned >20 Smith Elite basses in the past 15 years and this one was among the first and survived them all.
Bass has been played a lot but very well cared for. Some wear and dings/dongs all over the body but as you can see in the pics nothing that makes this wonderful bass less desirable. Structurally the bass is in perfect working condition.

These older BMT's have a real through neck. You can see the difference to newer models on the back: The newer Smiths have a soundblock laminated to the back of the neck, the older ones are produced completely through the back too. The reason for change is simple: the older version needs a lot more wood in ONE piece and much more effort to produce, the newer necks could be sawn out of smaller pieces.
These less laminates open the sound of the Smith and reduce the compression which is often inherent to newer models.
Compared to newer Smith models these older BMTs have a thinner neck profile which makes fast runs quite comfortable 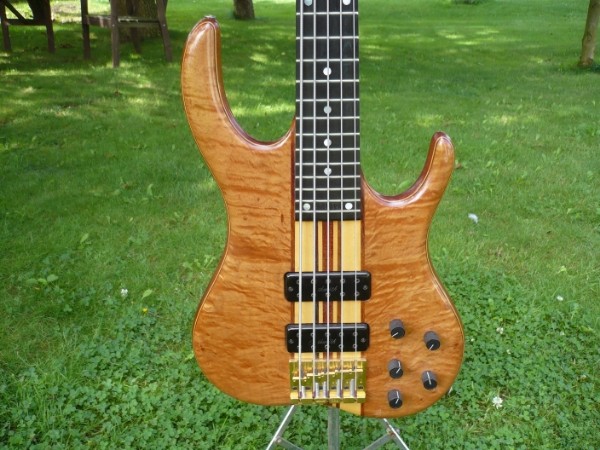 i recently sold one ken smith bt from the 90 , with diferent specs,this one is in a great price , what a bass i misss mine now
have a bump from me

Thanks, someone is coming this morning with a possible trade for a Wal bass so perhaps this leaves the house today...just played it to see if everything is ok when the possible trader comes and I almost regretted it

Again, Geert, coming full (Wal) circle
I also shortly owned that MKI 1988 yew - it had been completely revised by Paul Herman not so long ago by its previous Scottish owner from which I then bought and imported it to good old Germany ... small Wal-world ...

It is a small world, have it since yesterday....glad to have it in my house (it's my twelfth Wal, perhaps I should learn to keep one )
Du musst dich einloggen oder registrieren, um hier zu antworten.